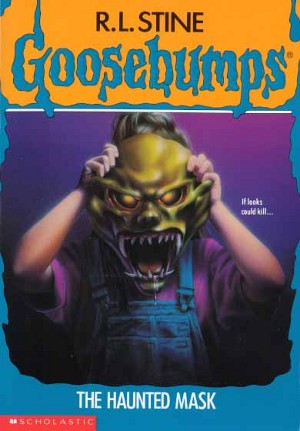 In honor of the spookiest month of the year, I thought I’d do a few posts on all things creepy and crawly. Let’s take a break from serious subjects and have some horror filled fun, starting with R. L. Stine’s famous horror series Goosebumps.

When I was a kid I wasn’t allowed to read Goosebumps. At least not until I was like, 10 or 11 or so I suppose. My older brother was allowed to read them, but I had to wait and that drove me crazy. I’d watch my brother read through a stack of books with the most fantastically creepy covers and I’d seethe with envy. If you ever read Goosebumps you know what I mean about the covers. Sometimes the covers were better than the story underneath! They had brightly colored monsters, haunted masks, BBQing skeletons, giant hamsters, werewolves, ghosts, ghouls, vampires, everything a kid could want! I’d see them sitting all in a row at the local library and look at each cover one by one. I may not have been allowed to read them, but who could stop me from looking? My parents didn’t want me reading them because they didn’t want me to have nightmares. My dad in particular was very protective of us when it came to anything scary and supernatural. Still, I can remember “borrowing” a Goosebumps book from my brother, crawling under my bed, and reading it by flashlight. When I was finally allowed to read them openly I devoured them. I read just about every Goosebumps that our local library had.

The first one I ever read, or at least the first that left any deep impression on me, was Goosebumps #2 Stay out of the Basement. I can still remember the story clearly: a scientist orders his two kids to stay out of the basement where he keeps his laboratory. He starts acting strangely, and when the kids finally do go down they discover…that he’s been slowly turning himself into a human/plant hybrid monster! I can’t quite remember what happened after that, but man did that book give me chills. The thought of human becoming something so inhuman as a plant was creepy enough, but that it was their own father took the cake. I didn’t know what I would do if my own father turned himself into a monster. And look at that cover (featured below)! I knew when I saw that cover that I was in for something great. 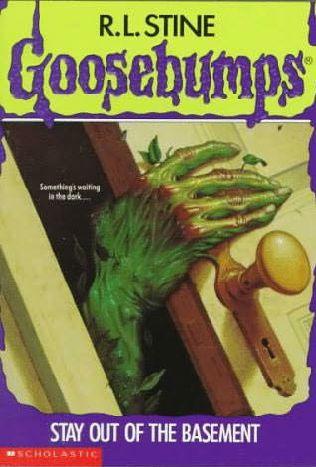 As I look back on Goosebumps I have a lot of good memories. The Haunted Mask, Don’t go to Sleep, Monster Blood, The Cuckoo Clock of Doom, Say Cheese and Die, Why I’m Afraid of Bees, How I Learned to Fly; these were some of my favorites. To be sure they were cheesy, silly, and as the series wore on (and the publishers goaded R. L. Stine to write them faster and faster) the quality did suffer. But I was too young to think that they were written badly. For me they were an outlet for my own love and fear of all things creepy, spooky, and monstrous. A safe outlet too, for no matter how badly the stories ended (and few ended happily for the protagonist) I knew that I was safe. This was fantasy, not reality; a parallel universe of exaggerated colors and shapes that I could peek in through the cover of a worn paperback.

Just for fun, here’s my favorite Goosebumps cover: the story was pretty mediocre, but that giant tongue still gets me every time!